Akif Beki has a column in Hürriyet, one of the biggest papers in Turkey. Considering him a ‘pro government columnist’ wouldn’t describe him properly: he is plainly a government writer. To illustrate that qualification: Akif Beki is one of the few Turkish ‘journalists’ who still have access to Tayyip Erdogan’s presidential plane, in other words, who are fully approved by Turkey’s most powerful man. 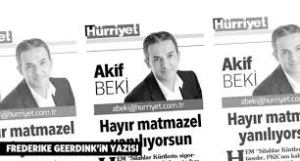 A few days ago, Akif Beki wrote a column about me. It was about the court case the state opened against me for ‘making propaganda for a terrorist organization’. He claimed that everywhere in the world, also in Europe, anti terrorism laws are tightened, and that if I wrote about ISIS in Europe the way I write about the PKK in Turkey, I’d be behind bars already.
He repeatedly referred to me as ‘matmazel’, which is Turkish for ‘mademoiselle’.

Here is my answer to him. You can find it in Turkish here on Diken.com.tr. If you want to read his column, I suggest you google it. No way I’ll put a link here.

Why are you using women’s honorifics to address me in a derogatory way? Do you know how utterly sexist that is?

From your column I conclude that you haven’t read my extensive work on the Kurdish issue very carefully. I always find that annoying, since I write my pieces and choose my words so carefully and then readers just read what they want to read with their own prejudiced mind.

For example, you think that I wrote that ‘the weapons are the Kurds’ insurance’. It’s not me claiming that, it was something Leyla Zana said some years ago. I used that quote in a column about the rumours that Öcalan would soon announce a permanent ceasefire. I reflected on the question of whether the Kurds don’t need any insurance anymore. In that analysis, which can be read here in Turkish and here in English, I also wrote about what Gültan Kisanak said at a press conference I attended: ‘Have you ever seen an armed movement which lays down its arms before the other side in the conflict has done any concessions?’ So I thought: wouldn’t the PKK be abandoning its own objective of reaching an ‘honourable peace’ by declaring a permanent ceasefire now, before the Kurdish issue is solved? I would find that a disappointment, because I wholeheartedly support an ‘honourable peace’ in Turkey.

Akif, do I understand you correctly when I conclude from your column that you support the decreasing freedom of expression in Europe? Maybe you do. I don’t. I don’t support the prosecution of French comedian Dieudonné M’bala M’bala, the example that you gave. The other examples, like the 14 year old French kid being prosecuted for not condemning the Charlie Hebdo attack, I don’t take seriously. There is really no such thing, and you know it. You just made that example up because you know some of your readers will believe such crap. That’s called ‘manipulation’.

But Akif, what on earth does Dieudonné have to do with me? He is a comedian, I am a journalist. He said ‘I felt like Charlie Coulibaly’; I never said anything like that related to Öcalan or to anybody else. I have never cheered on the PKK, I have never glorified Öcalan, I have certainly never ever called for violence, or called on the PKK to keep on killing. Unimaginable. On the contrary, I came to Diyarbakir to report on the peace that was promised in 2012, and I’d hate it if I had to report violence in Turkey again. I wrote about that. (English version here.)

You say that if I wrote about ISIS or Al Qaida in Europe like I write about the PKK in Turkey, I would have been jailed already. Not only is it not true that you get jailed for cheering on ISIS (you are even allowed to organize a demonstration in support of ISIS, since in democracies, the right to demonstrate is valued), also, like I said, it shows how little knowledge you have of my work and of what is written in European papers. It makes me wonder which languages you know besides Turkish, Akif?

European papers have actually been stuffed with articles about ISIS that can be compared to my articles about the PKK and the broader Kurdish political movement. Such articles try to explain where ISIS is coming from, what made them so strong militarily, and about what draws Muslims from, for example, Europe to join their war. It’s called analysis, to try to understand what is happening in the world. One of the aspects of my profession which I love dearly. No journalist is ever jailed in Europe for making a news analysis.

To make it easier for you understand, Akif, I will make some comparisons. Imagine that I was a Germany correspondent. I would try, for example, to figure out the Pegida-movement: where do its roots lie, who are the leaders, what are their goals, how do they try to realize them, who supports them and why? And why does Germany have such a big movement demonstrating against Pegida?

If I were working in my own country, the Netherlands, I would try to figure out why Geert Wilders is getting so much support. I would maybe live in a city or neighbourhood where many of his supporters live to get to know their lives and thoughts better – or I would live in a Muslim majority neighbourhood so I could write about the effects of Wilders’ racism on the community which he targets. Would such journalistic choices mean I support Pegida, or Wilders? Let me answer that for you, Akif: no, it wouldn’t.

I wonder why you consider my journalistic writing to be propaganda. Because explaining the PKK and the Kurdish movement properly, like I do, could actually make people understand them, their supporters and their goals? Maybe even raise some sympathy for them, or at least for their goals? Is that what you and the government you write for are afraid of?

I’m not getting into another fundamental mistake in your thinking, Akif, and that is drawing a comparison between the PKK and ISIS. Just one difference between the two, relating to journalism: I interviewed Cemil Bayik, who welcomed me politely, took his time to answer my questions and offered me water and water melon. What would an ISIS-leader do if I went to interview them? He’d rape me, chop my head off or set me on fire.

I’m not getting into this particular issue any further because you yourself know very well that the PKK cannot in any way be compared to ISIS. But you have to make this comparison, because the powerful man and the powerful party that you are tied to in every possible way do it too, and you are just their mouth-piece. You are not free to write what you like, you are not independent. I am so glad that I am not tied to anybody, that I am truly an independent writer and that I am paid only by media outlets which have no other goal than journalism.

And no, I don’t thank God for that. I made the choices that brought me to this point in my life myself, with my own heart and brain – and no they are not God-given but developed through evolution. So sorry, Akif, that I also won’t take your advice to me, to pray. If you don’t mind, I will stick to trusting my own inner compass, my analytic capabilities and journalistic skills.

3 thoughts on “Why does my writing scare you and the government you work for, Akif?” 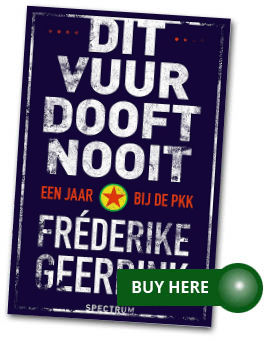